Riding your motorbike in winter

Posted by Spartan Motorbike Couriers on Tuesday, September 5, 2017 Under: Motorbike Riding Skills
You might have noticed it's been getting cold. This is the time of year when a lot of riders give their bikes a good clean, wheel them into a corner of the garage, plug in a battery charger and forget about them until the spring.
Yet in some respects, winter is the best time to be riding because congestion is worse and parking a car more difficult. As we reported earlier this year, a small increase in the number of cars has a disproportionately large effect on congestion, and when the weather deteriorates, a lot more people drive instead of walking, cycling or riding motorcycles. 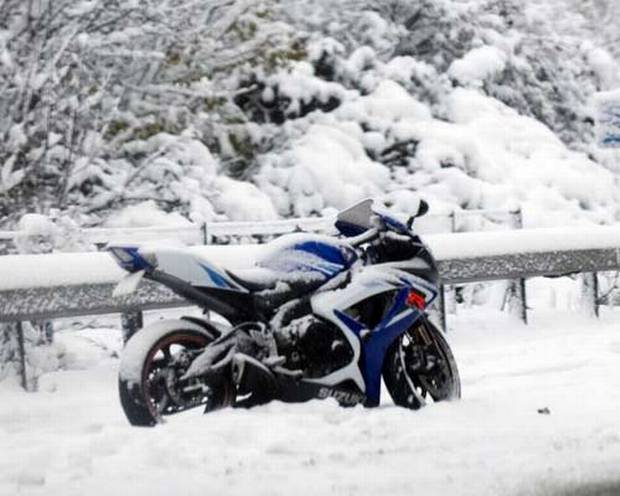 When you're looking out at cold rain driving against the windows and a bitter wind is bending the trees, it's tough motivating yourself to go out on a motorcycle, with little protection against the elements. But get past that initial barrier, and it's rarely as bad once you're out there, as long as you're properly set up for it.
The bike itself matters as there are some features which make a big difference. A fairing is a major advantage: the bigger the better. A big touring bike like a BMW R1200RT will even keep most of the rain off you, until you come to a stop that is, but it's more difficult to ride through heavy traffic than smaller bikes. Even a small screen makes a noticeable difference as the key is reducing the speed at which the wind is hitting you – this also reduces the windchill factor, which above 60mph is substantial.
A very useful accessory is a pair of hand guards, common on adventure-style bikes. These also break the wind pressure against your hands and stop rain hitting them with such force. Or try handlebar muffs, which wrap right around the bar and your hands – these certainly work at staving off cold but they can be clumsy to use and it's common at speed for them to push back on the clutch or brake levers.
A shaft drive is useful as it means less regular maintenance, although modern sealed lubrication chains aren't especially demanding anyway. However, while some riders do choose a bike specifically for winter riding, others are stuck with what they've got, and must instead focus on what they wear.
The right riding gear of course is crucial, but it can be expensive. I use a BMW Streetguard 3 suit by default as it's 100 per cent waterproof and tough too, but that's £1,000 for the jacket and trousers. It's warm, although others are warmer, the idea being that you increase the number of layers beneath as the temperature falls. There's plenty of thermal underwear available, such as the fabulously warm and comfortable layering from EDZ. Use their base layer, mid layer and Yeti jacket beneath good-quality riding gear and you could bike to the North Pole and stay cosy.
Names to look out for that offer good quality for reasonable prices include Hein Gericke (back in business after the UK importer failed), Held and Weise, and Triumph's own-brand clothing which is also excellent value.
The key with all of it is keeping out heat-sucking draughts, so get a jacket and trousers that zip together.

You also need to protect your neck well: there's a lot of blood near the surface here so it can be a major source of heat loss. A windproof outer wrap with a thermally efficient scarf or neck tube beneath works well, but be careful not to restrict head movement.
In the end, nothing beats a heat source from the bike itself. Good heated grips are very effective: BMW's and Triumph's work well, Suzuki's are too weak, and there are various aftermarket ones we've yet to test. A few bikes have heated seats which do help, though they can feel decidedly weird. But really, heated clothing is best, especially gloves. You're much less bulky than with multiple layers so comfort's better, and you just don't get cold whatever the outside temperature. The important factor is to make sure the bike's electrical system can cope – check the clothing's wattage against the output and other loads, as a lot of smaller bikes won't cope.