Posted by Graham Hill on Sunday, October 28, 2018 Under: Guest Motorcycle Articles
Motorcycles have long been a part of movie history, ranging from Peter Fonda and Dennis Hopper biking across the country to Marlon Brando and his bunch wreaking havoc upon small town America. These were great scenes indeed but which ones have stood out as the most famous? 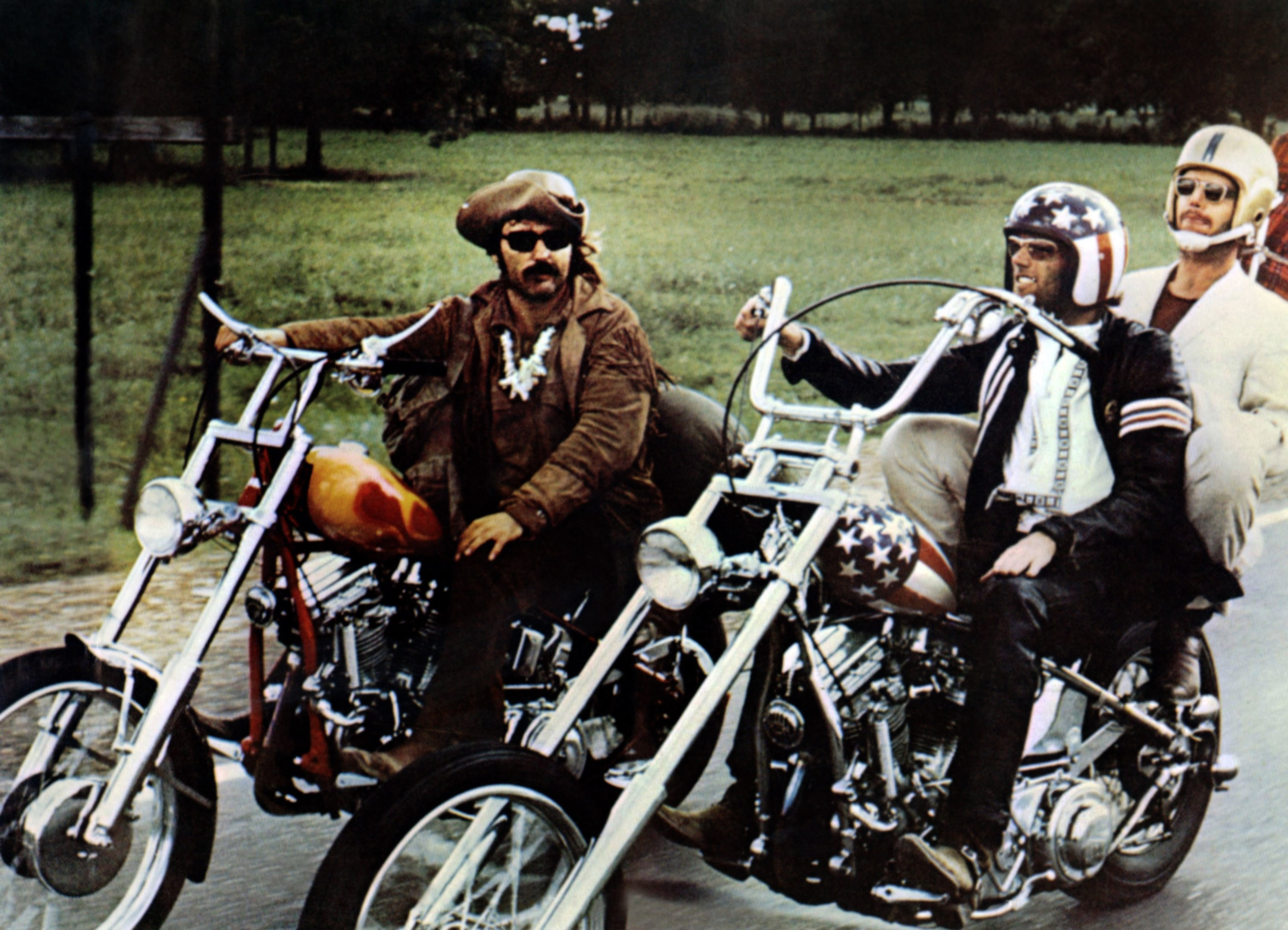 First Great Iconic Movie To Feature Motorcycles
Probably the first film of note which featured motorcycles prominently was Easy Rider, as it had custom bikes made especially for this film by 2 custom craftsmen. These 2 motorbikes were customized from a pair of twin Harley Davidson Hydra-Glides that were formerly used by police officers, and one was adorned with iconic American symbols. Dennis Hopper was the star and director of this groundbreaking film that was the first to feature the custom chopper vehicles.
It told the tale of two dopers who took off on a long odyssey across the country after gathering the proceeds from a major dope sale in Southern California. Renowned chopper builders Cliff Vaughns and Ben Hardy did the custom work on the two Harleys which were bought at auction for $500 dollars. There were actually 4 bikes in all - 2 stood as backups so filming didn't need to stop in case of a problem with one of the bikes. Ironically, one of the bikes was wrecked before the final scene was shot and the others were stolen, leaving producers scrambling for replacement bike kits to speed production.
Big Name Stars Rode Bikes In The Movies.
Another classic motorcycle movie starred the legendary Marlon Brando before he became overweight. He rode his own motorcycle -- a Triumph Thunderbird 650cc in the film. A small town was terrorized by Brando and his gang of Black Rebels along with another gang of hoodlums in the picture. This movie was based upon the true story of the Hollister riots where a gang of bikers did the same thing to a small town in California. Brando played the leader of the gang of hoods -- Johnny Strabler in the 1953 classic. Lee Marvin played opposite Brando as the rival gang leader in the movie.
It inspired on of the greatest movie posters of all time: Brando sitting on his Triumph motorcycle. The rock opera "Quadrophenia" by The Who was another picture that featured motorbikes in a prominent role. A Lambretta scooter was the featured vehicle in this picture set in 1964. It was largely scoffed at by riders of "real motorbikes." However, when put up for sale the scooter fetched an impressive 36,000 pounds.
Motorcycles During War Time In The Movies
One of the most famous movie scenes ever shot featured Steve McQueen trying to escape the Germans on his TT Special 650 Triumph. It was a piece of movie magic perfectly captured as McQueen is riding through the countryside being pursued quite avidly by Nazi soldiers. He actually tried the stunt himself, but crashed the bike instead. Fortunately there were spare motorcycle kits on the set and the stunt could be attempted again. Bud Ekins actually was the stunt double in the "Great Escape", and he was the one chosen for the second attempt over the fence that is seen by movie viewers. It has been arguably called the most famous stunt jump ever filmed in the moving picture industry, but there are other running a close second. This is the one scene from the picture that everybody remembers, and Ekins made the jump convincing enough. Even though McQueen didn't make the jump, he insisted the scene had to be included in the movie. McQueen and Ekins were both motorcycle buffs, and this help to "sell" the riding scenes.
Foreign Films Feature Motorcycles Too
The Motorcycle Diaries was released in the United States in 2004, and was directed by Walter Salles. It is set in 1952, and is the real life story of Ernesto Che Guevara who sets out to travel across the continent of South America before finishing his medical degree. Traveling with his friend Alberto, they ride through the mountains, along the coast of Chile, through the desert, take a detour through the Amazon and finally reach their destination in Venezuela in a couple of months; in time to celebrate Alberto's birthday which was on April 2nd. Riding an old Norton 500 (AKA La Poderosa) they actually arrive in July to their final destination. This is actually a very good foreign film that was shot in Spanish language audio with English subtitles throughout.
Newer Pictures To Feature Motorcycles
A newer movie to feature motorcycles as one of the attractions was "Wild Hogs", made in 2007. These 4 middle class dudes take to the road in their Harleys trying to seek a relief from their middle class existence. They use motorcycle kits to customize a Harley-Davidson motorcycle, including an XL1 200C Sportster, a black Fatboy, a Screaming Eagle Fatboy and an FXSTS Springer Softail for stars William Macy, Tim Allen, John Travolta and Martin Lawrence respectively.
Even James Bond has gotten into the act, featuring a BMW R1200 as he escapes a rather tricky predicament with the help of Michelle Yeoh. Together they manage to outrun the villains in a BMW automobile in true Bond fashion. Although motorcycles aren't often seen in Bond films, they do come in handy when needed.
Motorcycles In B-Movies
The Girl on a Motorcycle was a 1968 film starring Marianne Faithfull who decides to head for Heidelberg where he love was waiting after leaving her husband behind. She uses a Harley brand motorbike to make the ride across Germany, displaying some amazing skills when taking the twists and turns of the roadway en route. The film was also commonly known as "Naked Under Leather", probably a more interesting title but not as intriguing to riders everywhere.
Of course there are many more movies that have motorcycles playing a prominent role with some very interesting titles: "She Devils on Wheels", "Electra Glide in Blue", and "Chopper Chicks in Zombietown" are a few that come to mind, but these are primarily of the B-move genre and aren't well known to most movie goers.