Posted by Spartan Motorbike Couriers on Wednesday, April 29, 2020 Under: Dispatch Riders
In all wars, there are always those who go unnoticed, those who are pushed to the background leaving the sacrifices they made and the hardships they encountered out of the history books and, more often than not, out of our memories. One such group of unrecognised wartime servicemen are the dispatch motorcycle riders - an integral part of history that helped shape the world as we know it, despite having received no official form of recognition to this day. 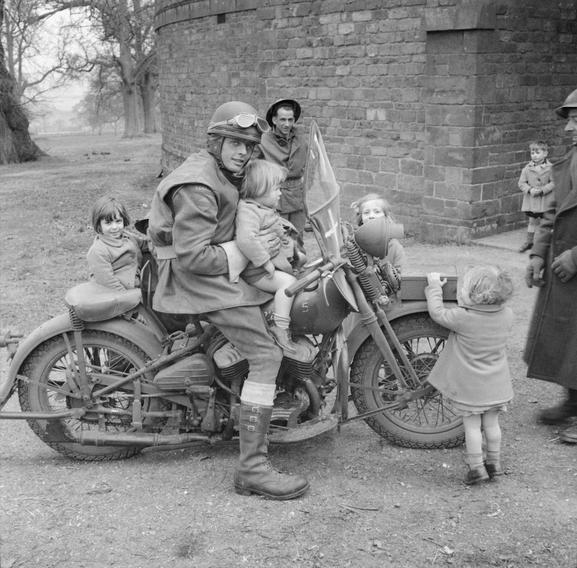 Riding through warzones, coming under enemy fire, sleeping it rough in rain or hailstorms, think it is about time that these unsung heroes were recognised for their insurmountable service and dedication when the world needed them most. So join us as we dig a little deeper into the role of the motorcycle dispatch rider. Motorcycle dispatch riders came to use in the military after it became necessary to find alternative methods of communication rather than the radio or telephone, as Robert Fleming, historian and curator at the National Army Museum, London, explained.
"The Royal Engineers Signal Service also brought battlefield telephones and early wireless sets into service, but telephones relied on overground, or 'OG' lines which were frequently cut by artillery shelling, and wireless could be intercepted and didn't have great range 100 years ago. So the humble despatch rider was still relied on to get messages through."
Several different motorcycles were utilised by riders, but it was the British-made Triumph that was used most frequently throughout the First World War. Of the Triumph, Fleming goes on: "The Triumph had a 550cc side-valve four-stroke engine with a three-speed gearbox and belt transmission, and with around 3½ horsepower, could manage a very respectable top speed of 45-50 mph, and was nicknamed the 'Trusty Triumph'," he laughs.
Due to their high demand across the country, in August 1914, the War Department asked if motorcyclists would volunteer their bikes for dispatch work, and received a hefty response from British civilians. The London office had many more applicants than places; with positions filling up fast, over 2,000 applicants missed out. "Young lads were desperate for wheels," begins Dennis Cooney, a dispatch rider for the National Service shortly after the first World War, and a member of the Vintage Motorcycle Club.
"You couldn't afford any really, but to go into the army and be given a motorbike to ride, you know, that was great! You were called to join the army and you've probably never been out your village, and the thought of joining the army and going to London." All villages with all the young chaps volunteered because it was an adventure, a different part of the country," continues Cooney.
The life of a dispatch rider proved more treacherous than an infantryman, and were paid accordingly. Swept up by what Fleming describes as "an initial patriotic euphoria" at the outbreak of the war, young men were quick to enlist.